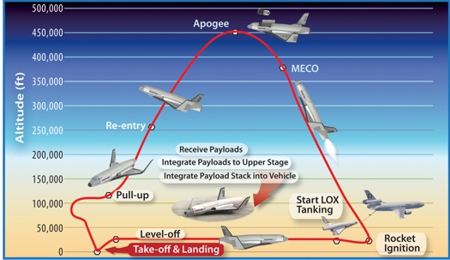 The XS starts at a standard commercial airport with a runway long enough for a large passenger jet: 12,000 feet is sufficient. It takes off with standard airport procedures - once cleared for takeoff, it powers up the jet engines, and takes off as a standard jet airplane.

Most rockets start fully fueled at zero velocity on the ground. With a start at 700 km/hour, 30,000 ft., the XS saves approximately 20% of the fuel required to get to altitude. Also with a lighter load on takeoff, its structure can be significantly lighter than required for a fully loaded vehicle. This allows the XS to deliver a much larger payload than any vehicle of its class in size.

It ascends under rocket power to 120 km altitude, approx. Mach 11, (12,000 km/hour). When the liquid Oxygen is used up, the rocket is turned off and the rocketplane coasts to its final altitude. The satellite is released as soon as possible after the rocket engine stops to allow the satellite maximum speed. The satellite requires a booster to take it to orbital speeds of approx. 30,000 km/hour. With no resistance from the atmosphere and minimal loss of speed to gravity, a small booster is all that is required for the final push to get to orbital speeds.

The rocketplane glides back to the flight heights, and at 30,000 ft it restarts the jet engines. It has sufficient fuel on board to fly 500 km home. If necessary for an extended flight after the satellite launch, it can meet the tanker a second time, load on more fuel and fly up to 10,000 km to the destination airport.

Upon arrival at the desired destination airport, landing is under standard flight conditions - it is in all aspects a jet airplane landing at an airport.